Crude has managed to get really far in its "correction" phase as the commodity priced-in a double bottom formation broke 33.73 and reached its peak at 42.55. The movement is surely supported by a climbing demand for the "black gold" and hopes and dreams from OPEC for an emergency meeting scheduled for April rather than the summer of 2016. Price is supported by the assessment from the market that there will be productive talks and that OPEC may change its strategy. Yesterday's EIA weekly crude inventories data showed a substantial rise in the crude storage:

EIA is pretty much following the API data. Sizable draw down in gasoline stands out. Crude imports rose 691k and its the highest since June 2013. 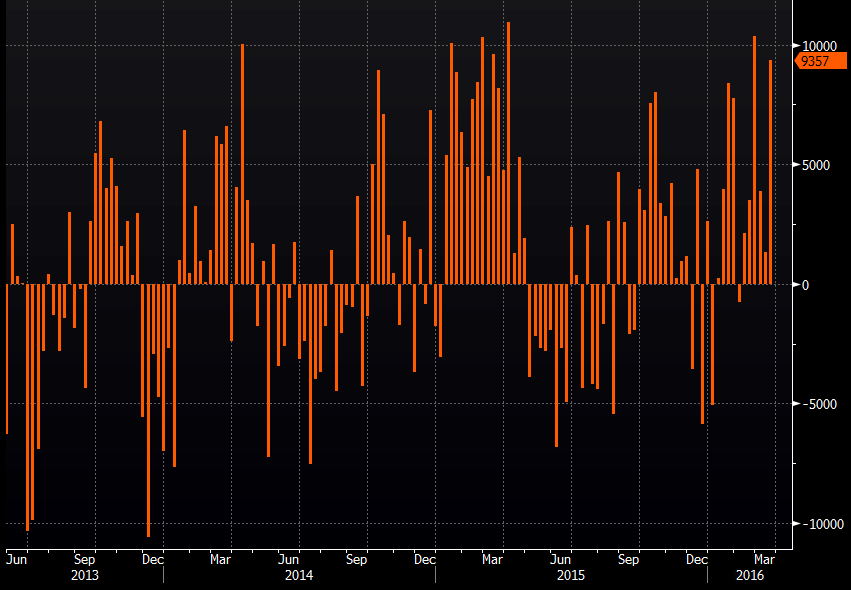 Crude ticked down on the news and finished the day lower. Price opened at 41.37, made a slight high at 41.51 and overall was suppressed and price went low to as 39.91 for a close at 40.01$/brl. On the top side 42.55 remains strong and could be balancing force for any attempts from the price to move up. Bottom side is where 37.54 lays and waits. So a range between these two levels may be forming as OPEC approaches and as always be careful as recently "buy the rumor, sell the fact" plays out very well and don't get stuck in any whipsaws. For me this movement may be all well exhausted and bulls will catch some breath which is a perfect opportunity for bears to come in and taste some of the "black gold". If movement down accelerates 35.47 will be contested for sure.